Back in 2006 aged 33, Lee Barlow was a very fit and active builder, enjoying life in the very warm summer of that year. Carrying on his business where he lived in Roundhey, Stockbridge Village, unexpectedly he started experiencing breathing problems. He went to his GP several times to be told that he maybe had some kind of asthma that was being made worse by the heat and the dusty conditions. The problems continued so Lee was referred to Fazakerley Hospital. After several tests were carried out Lee was finally diagnosed as having an enlarged heart, a condition called dilated cardiomyopathy. At Broadgreen Hospital Lee had a defibrillator fitted in order to correct a potentially fatal irregular rhythm of his heart known as ventricular tachycardia. The device delivers an electric shock to change this very rapid and ineffective cardiac rhythm to a slower, more effective one. Fortunately for Lee he received his transplant before the defibrillator was actually used to regulate his heart. Lee admits he was petrified at the prospect of having his heart shocked back into a regular rhythm – some nasty person had told him it would kick in with a huge thud!

Lee is no stranger to heart problems. Sadly his father Frank died of heart failure at the age of forty-four; nearly forty years later Lee was heading in a similar direction. His mother and one of his brothers also have heart conditions. Although worrying, Lee was relieved to be referred to the Wythenshawe Transplant Clinic to be assessed by Dr Simon Williams.

Lee describes his frequent meetings with Dr Williams at Wythenshawe as “being put through an MOT.” Five days of thorough examinations have to take place before a person can be put onto the heart transplant list to ensure that there are no other medical conditions present which may pose a barrier to a successful outcome following transplant surgery.
Due to the overall shortage of solid organs doctors have to be convinced that a patient has no other option than to have a heart transplant. They have to check that no other medical options could be used to maintain the health of a patient. This avoids the unnecessary use of a scarce organ. Although a very successful operation, heart transplantation is a high risk medical procedure. Dr Williams has described it as ‘being put through a controlled road traffic accident’ – best to be avoided if at all possible or if there is another alternative.

By the end of November 2006 Mr Yonan, the Director of Transplant and his team, authorised putting Lee onto the transplant list. He said “It came as a real shock. I knew it was really serious and could have died at any time.”
Lee was very relieved to be told that a heart transplant would solve his breathing difficulties and restore his quality of life.

Once on the waiting list Lee had to face the pressure that he could run out of time waiting for a heart. It was on Christmas Eve, 2006 that Lee got the call for his heart transplant. He arrived on the ward only to find that the heart was not in fact suitable for him, so he had to return home to spend Christmas Day waiting for when his next chance might arrive. He said later that he was really pleased, because he was really looking forward to his Mum’s Christmas dinner!

Fortunately for Lee the second opportunity came on January 24th 2007. His operation took around 15 hours which is much longer than the routine time it should have taken, about four hours. Some more technology had to be brought to his rescue. Lee’s transplanted heart would not work effectively on its own. So he was connected to a ventricular assist device (VAD) to support the pumping action of his heart.

But not only this, Lee became the first person in the UK to be attached to an “ECMO” machine at the same time as a VAD. The ECMO device (Extracorporeal [which means outside the body] membranous oxygenation) is a temporary life support technique. It involves connecting the internal blood circulation to an external blood pump and artificial lung effectively by-passing the patient’s own lungs. The device has a membrane which allows the gas exchange of oxygen and carbon dioxide to take place. The oxygen is then re-circulated through tubing to the patient’s veins or arteries – keeping the patient alive until their heart and lungs recover to function naturally, without support.

post operation. At last he is free of any mechanical support devices. Ready for the human support system to take over! Family and clinic staff step in.

Lee was supported by the VAD and ECMO devices for five days. This was ground breaking work because, as far as the Clinic is aware, the two machines had never before been used on the same patient at the same time. The technology supported Lee’s donor heart well enough for it to recover and work independently. The Wythenshawe Transplant unit and Lee go down in history as pioneers of a new cardiac technique. Lee took 9 days to come round from his operation in time to celebrate his 34th birthday, on Valentine’s Day, in the Jim Quick ward with his family and nursing staff. 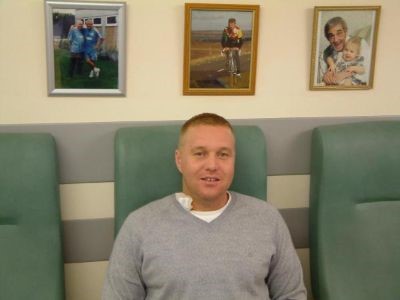 Lee after another successful biopsy at the Clinic which
helps to check whether any rejection has occurred with the heart. 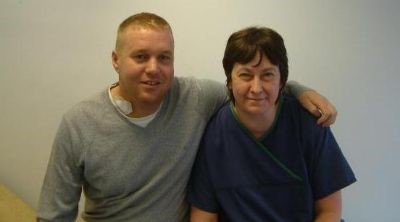 Lee knows only too well that he owes a great debt of thanks to his donor and his/her family. After the operation he said “I’m so grateful to all the staff here and as soon as I’m better I will start fund raising for the hospital.” Lee knows that some of the funding for VAD came from the New Start charity attached to the Wythenshawe Unit. His family have raised a great deal of money for New Start since his operation, especially his niece Natalie who even risked a sponsored sky dive for the cause. 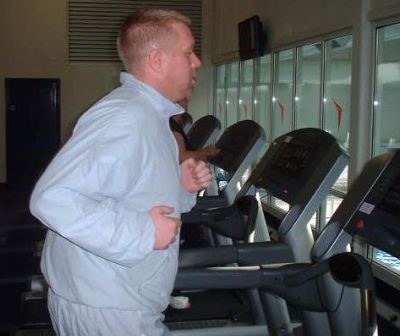 Lee is already in training for next year’s British Transplant Games at Sheffield and is determined to run in the Great Manchester BUPA run next May. He is already challenging Clinic staff that he will achieve a better time than them! What better way to protect the investment of a “second chance of life?” (If you are interested in competing with Lee contact Janice Taylor at New Start). 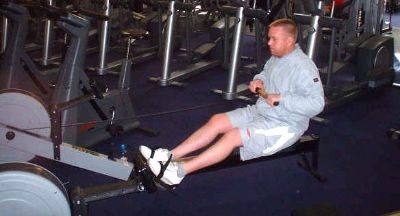 Is this the reason that Olympic Gold medals winner, Steve Redgrave, retired?

Lee is currently under-going cardiac rehabilitation and has volunteered to help other cardiac patients with their recovery programmes. As with many transplant patients Lee sees this as his way of re-paying the brilliant medical support he has received, by helping others less fortunate than him. In the long term he hopes to train as a Physiotherapist and enter a marathon race next year. What a remarkable transformation in his life over the last 12 months.