In July 2017, a Wythenshawe team of 18 made the long journey up to North Lanarkshire to take part in the Annual British Transplant Games. 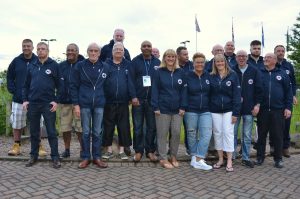 The first day started with the experienced archers competing in damp conditions but they were a definite improvement on the conditions last year in Liverpool, Pete Nichols took gold in his age group whilst John Crook and new comer Russ Hazeldine took bronze.After lunch it was the turn of the beginner class and Gary Still was triumphant in the under 30 age group whilst Dave Ayre matched his achievement last year and took bronze. Our medal tally was looking good and Paul Ashberry added to it by bronze in the squash. Neil Macdonald was also taking part in the snooker where he was narrowly beaten out of a medal. 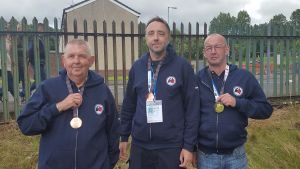 Friday dawned fortunately without rain as Games Novice Geoff Suthers was our only entry in the Golf this Year. He narrowly missed out on a medal but will be back next Year to challenge. Meanwhile our Volleyball Team made up of Neil MacDonald, David Ayre, Gary Still, Peter Nichols, Kashmir Singh, Paul Ashberry, Russ Hazeldine and honorary member LIz Hosford from St Georges won their way through to the final and after a tightly fought game ended up with a a silver medal. It was a fantastic effort as the majority of the team were new to the sport so the future is looking bright on the Volleyball court for Team Wythenshawe. Wayne Lang missed the volleyball to play in the table tennis which was taking place at the same time.The gamble paid off as he came away with the silver medal. The afternoon saw Steven Crook and Kerry Jenkins take part in the 10 pin bowling which is probably one of the biggest events in the games.The Evening saw Team Wythenshawe decamp to an all you can eat buffet in Motherwell and then to the Civic Hall where the darts competition was taking place with our very own Kashmir Singh taking part and also a traditional Scottish ceilidh. 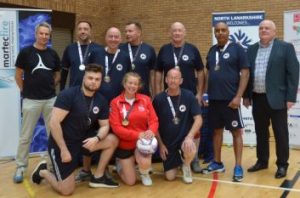 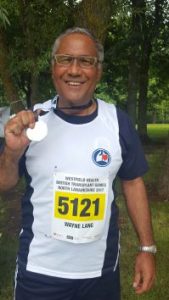 Saturday is traditionally the Swimming day. Our swimming team was depleted this Year with injuries, but our 2 competitors did not disappoint, fresh from his triumphs at the World Games in Malaga, Bill Noble scooped 5 golds and Neil Eadie a bronze. Meanwhile Dave Ayre  was in a marathon bowls competition in which he eventually achieved a hard fought for bronze medal. Out of a field of a 100 competitors and a novice at sport it was a fantastic result. In the Evening we had our Team Meal  in the Hotel 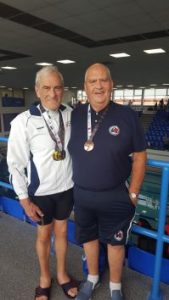 Sunday we set up camp at the athletics track ready for a day or athletics and field events. Our athletes didn’t disappoint. Gary Still took gold in the Shot Putt and Discus and a silver in the Javelin. Wayne Lang finally won gold in the Long Jump and silver in the High Jump. Alan Schofield returned to the games with a bang taking silver in the 800m and bronze in the 400m, Russ Walton and Pete Nicholls added to the tally with  bronzes in the Ball Throw and long jump 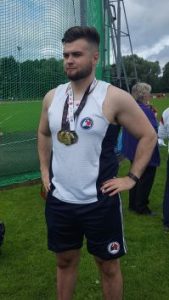 The games finished with a huge gala celebration at Ravenscraig Sports Facility. Where everyone dressed to impress.

The total medal tally was an impressive 10 gold, 11 silver and 9 bronze.

It was great to welcome newcomers Geoff Suthers, Russ Hazeldine and Tommy Butler to the team. Next years games take place in Birmingham from the 2nd August where i hope we can welcome many more members to Team Wythenshawe.