This year saw our team  of 21 Athletes competing in the British Transplant Games in Liverpool.

The Archery took place on the first day of the games in intermittent rain at Liverpool Cricket Club, we hoped the weather wasn’t set for the weekend. In the morning the experienced Archers of Pete Nichols, Ken Mackie,John Crook, Stephen Crook and Tricia Moore had their turns in front of the targets. Pete Nichols and Ken Mackie as games veterans took silver, Games newcomers John Crook took silver and Tricia Moore won our first gold of the games.

In the afternoon it was the beginners turn. Games newcomers Neil Eadie and David Ayre both took bronze in their age categories. Natalie Kerr won her first games medal ever taking silver and Kerry Jenkins narrowly missed bronze finishing 4th 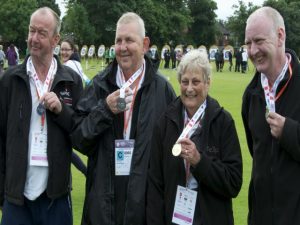 Whilst the Archery was taking place our snooker players Kashmir Singh, Andy McGarry and Neil MacDonald were enjoying being warm and dry at  the snooker competition. No medals were won but Neil won the plate.

Luckily the weather dried up for the Opening Ceremony and the team parade. 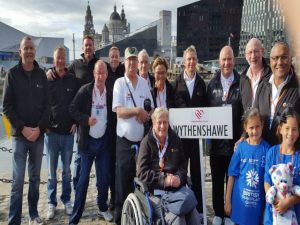 Friday saw the Golf tournament taking place in which Andy McGarry, Simon Harris and Kashmir Singh took part. Simon and Andy won bronze. Whilst on the Badminton court Neil MacDonald also took bronze. A few of our athletes took part in the ten pin bowling in the afternoon. Andy McGarry hot footed it from the golf course to the tennis court and in front of his adoring fans (family and staff from the tennis centre) he scooped another Gold medal for Wythenshawe. He had a reputation to live up to as he is the head tennis at the venue! New team member Natasha also scooped gold in the Ladies Tennis. 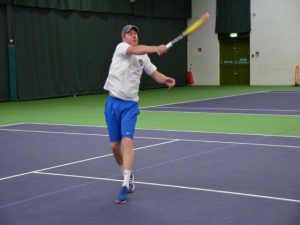 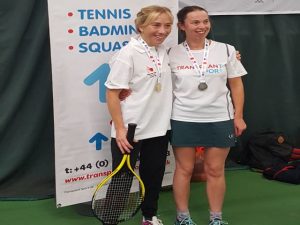 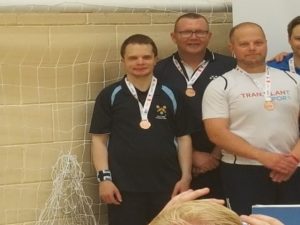 New comer and youngest member of the team Gary Still and Ken Mackie took part in the cycling on the Friday Evening neither won medals but Gary was the fasted male heart recipient Not bad for 8 months post op! It was then a quick dash to the darts where Trish Moore, Kashmir Singh and Simon Harris were taking part. Kash and Simon made it into the second round but were then knocked out, obviously through lack of time spent training in the Pub.

Saturday dawned bright and early for our Volleyball team of Neil MacDonald, Simon Harris, Lee Barlow, Kashmir Singh, David Ayre, Pete Nichols, Gary Still and adopted member Liz Hosford. In very stiff competition the team lifted the bronze medal. It was great for the team to welcome some new members who played really well and the team looks good moving forward to the Transplant Sport Volleyball Tournament in November.Whilst the volleyball was taking place Wayne Lang won silver in the table tennis  Other members of the squad who could find the Bowling green (Note to Father Christmas Neil needs a sat-nav ) went to play bowls. Swimming was the main event of the afternoon with our boosted squad of Bill Noble, Neil Eadie, Wayne Lang, Natasha Kavanagh and Kerry Jenkins. Between them they netted a fantastic 5 gold, 2 silver and 4 bronze. 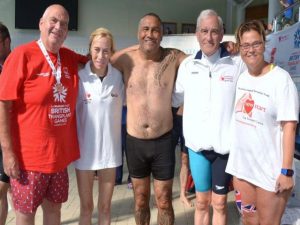 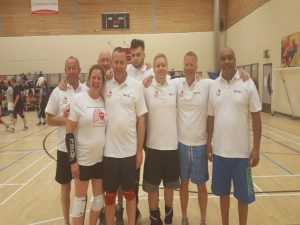 Sunday everyone was at the Athletics for the track and field events. Thankfully the sun came out. Ken Mackie complete in kilt competed in the 100 metres sprint but I think the wind resistance of his flying kilt slowed him down so he didn’t make the podium. Gary Still on his debut netted a bronze medal in the discus and a silver in the Shot Putt. Simon Harris despite an injured shoulder got bronze in the ball throw. Wayne won silver in both the high and long jump. David Ayre another debutante won bronze in the Discus. Andy McGarry was narrowly pipped to bronze in the high jump but managed to add 15cm to his PB. 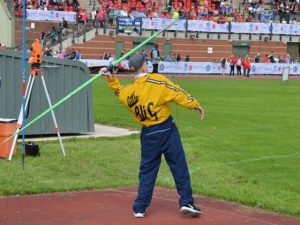 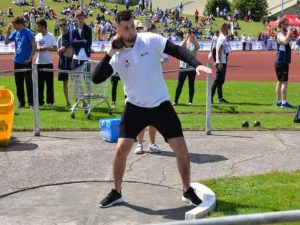 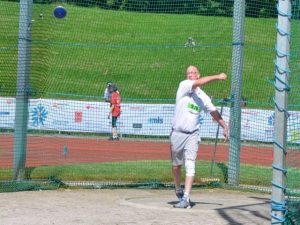 In the Evening most of the team put on their glad rags and attended the Gala Dinner Award Ceremony. Bill Noble was awarded the overall best Heart Recipient of the games and also the Super Veteran Trophy. 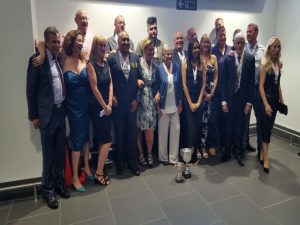 Lots of new friends were made, personal achievements were gained as well as medals. Everyone is looking forward to North Lanarkshire in 2017. As you can see the sports available are very varied. If you would like to take part in 2017 or want to find out more please contact the  New Start Office or Jane Nuttall in the Transplant Co-ordinators Office as we would love you to participate.