On Friday 30th July, Jess and Matt (who should have been tying the knot that Day) and Friends Dominique and Michael set out on a gruelling 44 mile walk from Radcliffe to Blackpool! It poured down for 16 hours, their feet were covered in blisters and a few tired tears were shed but the support, motivational messages and remembering why these charities are so important to them kept them kept them going. They were greeted at Blackpool Tower by the cheers and hugs from family and friends. The total amount raised was £2,253, this will be split between Trinity Hospice and New Start, two charities very close to their hearts.

A big thank you from all of us to these 4 Youngsters who battled the elements to finish this Challenge on the Day Jess and Matt should have been tying the knot.

On one of the hottest weekends of the Year a group of Friends led by Paul Coventry cycled from Liverpool to Yorkshire in readiness to take on the Yorkshire 3 Peaks the next day. The target for anyone doing the 3 Peaks is 12 hours but despite cycling the Day before and the heat they smashed the target to complete it in 10 hours, What an Achievement. They managed to raise £5000 for New Start in memory of Paul’s Dad, Gary who had passed away 10 Years ago after a double lung transplant. many thanks to Pauls employees NCC Group who donated £500 to the cause.

Dave Ayre and friends completed the Coast 2 Coast cycle ride at the end of last week, raising over £12k for the Charity. Below is his Diary of the Trip:

After months of preparation, 23 of the finest athletes Alsager old boys & Ashington grammar school could muster, met to take on the arduous task of cycling the trans Pennine trail, 215 miles of mixed terrain. The day didn’t get off to the best of starts when the organiser turned up at the wrong starting car park. Nevertheless, things were quickly rectified and after the obligatory team photo, the party set off in selected groups at different intervals. Best laid plans! Within 3 or 4 miles there were different groups heading in all directions! After settling down, into Aintree we went & despite a few minor issues we progressed to the lunchtime stop at The Childe of Hale. After a bite to eat, Mick produced his wee guitar and Messers Ayre & Moffat gave a fine rendition of ‘The Fog on the Tyne’. Setting of for the remaining 20 miles or so, the wind was blowing into our faces, but the banter kept us going. A lapse of concentration saw Goose & Shiner hit the deck, but like spring chickens they were up & away quickly . 2 punctures tor Smithy & TC were par for the course. The last few miles or so were tough, mainly because we were desperate for the finishing point! Smashing fun!. Whoever said working with kids & animals is a no no, should’ve seen some of the geographical buffoons out here!

Tuesday , Altrincham to Penistone Sometimes you have to wonder if you’re jinxed! As we set off, we were turned back from our route, by the police who reported a death somewhere on the canal path. Quickly re-routed, the delay was minor and frankly, the ride and the weather to Stockport were great. Of course there was an obligatory stop at a cracking patisserie in Didsbury, where a young lady called Jane, sitting outside with her young child, got chatting with some of the group and made a £20 donation. On to Hadfield, base camp for lunch and the start of the real climb, Lockerbie popped in for a sportsmanship lunch of pie and chips, where the owner donated £10. The bakery down the road donated £5. All food demolished we set of to climb up to Windles Edge, the highest point on the trail, but alas, one dozen group of 5, completely missed a big sign to turn off and went off on a sight seeing journey never to be forgotten. In short, the group, who shall remain nameless, ended up in Glossop and climbed up and conquered Snake Pass. The main groups arrived in Penistone around 4.30, the sight seeing five at 7.30! In the meantime ,Peanut bought the manager of Cubly Hall a pint and very kindly made a £50 donation. A very kind gesture, as were all donating gestures today .That’s the tough one done, now for the flatter, longer days!

Having done the real hard work yesterday, many of the group were expecting a much easier days cycling. The Geordie group were up & away early and followed the northern route. The college boys stayed relaxed and they too opted for the same route. Alas, once again,15 of them missed the turn off! Thus, it was to be the southern route, which gave more challenging , rough terrain climbs. We do not like to do the simple things! It seemed to take an eternity to reach the 28 mile half way point. Actually, it was something like 5 1/2 hours! The second 28 miles went more smoothly mainly when the group splintered into 3 groups. In Bentley, TC almost went under a Mr Whippy ice cream wagon, in his desperation to get a 99! Many thanks to Mr Whippy for his donation to the fund. This part of the ride was characterised by long bumpy stretches along the bumpy canal, and some pleasant pathways and road section. Eventually, the group at the rear, finished the crossing line at around 7.50pm.Todays rider award went to Barry Pollen for a mighty performance on all accounts

Day 4, the final leg….Selby to Hornsea

A very wet Thursday morning in Selby threatened to derail the good weather from the previous 3 days. The jinx that is David Ayre soon struck when a wrong turn only a few miles into the ride sent the ‘geordie’ group over very stoney ground, aggravating bottoms that can only be described as somewhat tender. Persistence was not rewarded, as a tractor path led to an isolated winter barn but no other exit. Bikes were taken through long grass, passed over locked gates & ridden over more bumpy paths, before civilisation was again found. 3+ hours for 10 miles tells it’s own story! Despite desperately trying to make up time, but more delays in Hull & very long breaks for coffee / cake & a pleasant lunch in Hessle, meant we were lagging well behind. Even mechanical problems for Milo, meaning a desperate call to broom wagon man Mick, who delivered a swift service & got him back on the road. Once through Hull, the final group powered on in the final stages only to discover everyone else were at the agreed meeting point only a few miles short of Hornsea. Of course, this point was a pub! What’s more, the earlier groups had sampled a few of the establishments finest ales & were just a little worse for wear. What is more, 2 members who were later to be charged by the rest of the group with using the charity’s logo on our t- shirts, to chat up 2 ladies & badly imitating Barry White & Tom Jones faced their accusers ! Naturally, they were found guilty & fined £5 each, with the money going into the charity box. The 2 lady victims of this hideous chat up also donated £10.Meanwhile, out on the route, the northerners suffered further blows. 2 punctures to Gary & Kevin further delayed their arrival…and after discussion, Dave, Gary & Bruce took off again, eventually arriving at the pub & linking up with the main body of the group. Within 15 minutes, the party arrived in Hornsea ro raucous applause from our 4 loyal spectators Jacki, Alison, Carol & Karen. After champagne celebrations, team photos & a wee closing speech from ‘Red Leader’, 10 hearty souls descended into the freezing cold sea to complete the closing ceremony. Oh yes, one final scenario saw Clarkey emotionally kiss his bike farewell & depart to the hotel. When asked what he would use to ride again, he simply replied ‘ I ain’t never gonna ride again’. To further enhance this story, a man & wife walking along the prom were quickly persuaded to give the bike a new home, for free, but one of us suggested a small donation to New Start might be a kind gesture! A fiver in the kitty, job done!

A massive thank you to all who took part and not only raised money for the Charity but also spread organ donation message the width of the Country. Its not too late to donate. Please Click HERE 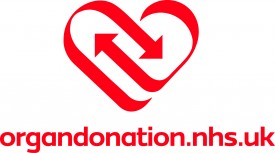